WWF-Canada have released a new study that identifies three coldwater coral “hotspots” off Newfoundland and Labrador and assesses the impact of fishing on these fragile organisms. The study provides the scientific basis for Canadian and European governments to protect sensitive coral habitat in the Northwest Atlantic.

Coldwater corals are long-lived animals that live along continental slopes, seamounts, and mid-ocean ridges. These corals are important parts of deep-sea ecosystems and provide habitat for other invertebrates and fishes. Coldwater corals can be damaged by fishing or other seafloor directed activities and may take centuries to grow back, if at all. 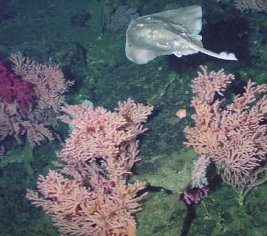 “Canada, Spain, Portugal and Russia are the countries that have the greatest potential to damage these globally important concentrations of corals,” said Dr. Robert Rangeley, Vice President, Atlantic, WWF-Canada. “Their fleets are among the largest operating off Newfoundland and fish in and around the areas identified as hotspots. This also means they have the greatest opportunity to protect them.”

“Our study mapped where corals are found, and identified areas where coral bycatch is highest for a variety of fisheries and gear types,” said lead author of the study Dr. Evan Edinger. “Our research demonstrates that no matter what type of fishing gear is used, bottom-contact fishing in coral habitat damages corals. Therefore, it is very important that any areas established to protect corals exclude all bottom directed fishing activities.” This research builds on a growing global movement to protect coldwater corals and seamounts. In 2006, the United Nations General Assembly called on fisheries management agencies like the Northwest Atlantic Fisheries Organization (NAFO) to implement vulnerable habitat protection measures by December 2008. In response, last year NAFO signalled their intent to protect seamount habitats.

The Report, Coldwater Corals off Newfoundland and Labrador: Distribution and Fisheries Impacts may be downloaded at: http://wwf.ca/coral

What do you think of this news item? Start a discussion.
Bookmark with: del.icio.us | Digg | Newsvine | NowPublic | Reddit
|

No batteries needed for underwater exploration