Researchers at the Monterey Bay Aquarium Research Institute have observed a deep-sea octopus brooding its eggs for four and a half years – longer than any other known animal. Throughout this time, the mother kept the eggs clean and guarded them from predators.

Octopuses typically have a single reproductive period and then they die. Once a clutch of fertilized eggs has been produced, the mother protects and tends them until they hatch. In most shallow-water species this brooding period lasts between one and three months. Very little is known though about the maternal behaviour of deep-living species. In the cold, dark waters of the deep ocean, metabolic processes are often slower than their counterparts at shallower depths.

Every few months for the last 25 years, a team of Monterey Bay researchers led by Bruce Robison has used a remotely operated vehicle (ROV) to survey deep-sea animals at a research site in the depths of Monterey Canyon that they call “Midwater 1.” In May 2007, during one of these surveys, the researchers discovered a female octopus clinging to a rocky ledge just above the floor of the canyon, about 1,400 meters (4,600 feet) below the ocean surface.

Each time the researchers returned, they found the same octopus clutching the vertical rock face, arms covering her eggs. 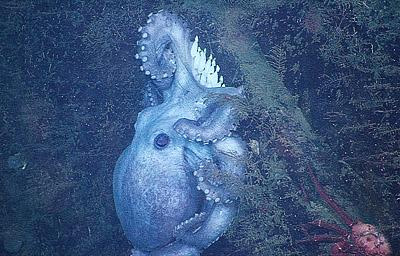 As the years passed, her translucent eggs grew larger and the researchers could see young octopuses developing inside. Over the same period, the female gradually lost weight and her skin became loose and pale.

The researchers never saw the female leave her eggs or eat anything. She did not even show interest in small crabs and shrimp that crawled or swam by, as long as they did not bother her eggs.

The last time the researchers saw the brooding octopus was in September 2011. When they returned one month later, they found that the female was gone. As the researchers wrote in a recent paper in the Public Library of Science (PLOS ONE), “the rock face she had occupied held the tattered remnants of empty egg capsules.”

Previously, the longest octopus brooding known was 14 months. The longest guarded incubation known for fish eggs is 4–5 months, by the Magellan Plunder Fish Harpagifer bispinis in Antarctic waters. For birds, the longest uninterrupted egg brooding is 2 months, by the Emperor Penguin. Among live-bearing species, elephants gestate for 20 to 21 months, frilled sharks carry their embryos internally for about 42 months, and the internal gestation period of alpine salamanders can reach 48 months before birth.

The prolonged brooding period for the deep sea octopus is a result of two factors, low temperature and the advantage of producing highly-developed hatchlings.