Voted one of the top 100 dive sites in the World, Gozo’s Inland Sea to the Azure Window has been shattered.

The imposing arch collapsed this morning during a storm.

The Maltese prime minister, Joseph Muscat, tweeted the news today at 9am – referring to the structure with the Maltese name, Tieqa tad-Dwejra. “Reports commissioned over the years indicated that this landmark would be hard hit by unavoidable natural corrosion. That sad day arrived.”

I have just been informed that the beautiful Tieqa tad-Dwejra in #Gozo has collapsed. Updates soon.

The rubble produced by the collapse of the arch starts at 10 metres and descends down to some 50 metres. People have been warned not to dive in the area for the time being.

In 2013 a geological report on the Azure Window concluded that the arch was relatively stable in the short term. However, 10% of the lower layer of rock was expected to collapse within 10 years, leaving an upper layer which was at least 4 m thick. The pillars were thought not to be in danger.

The Dwejra area, in which the Azure Window was located, is a natural depression produced by the dissolution of subsurface salts which triggered the formation of large circular sinkholes, inlcuding the Inland Sea. 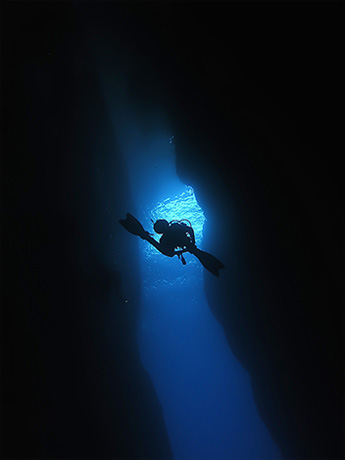 Diver leaving the Inland Sea on the way towards the Azure Window.
Photo credit: Runeng

Last year the Maltese government made walking across the arch an offence punishable by a fine of 1500 Euros.

The Maltese archipelago lies at the centre of the Mediterranean, 93 km south of Sicily and 288 km north of Africa. It comprises three islands: Malta, Gozo and Comino.

GEOLOGICAL AND GEOTECHNICAL REPORT ON THE AZURE WINDOW, GOZO: ROCK ASSESSMENT AND RECOMMENDATIONS ON PRESERVATION AND CONSERVATION. July 2013.

State of Europe’s seas getting worse