Ahmed Gabr has made the deepest ever scuba dive—to 332.35 meters—in Dahab in Egypt.

The dive was projected to take 14 hours to complete, with just minutes of this being the descent time. Gabr and his support divers team planned to use about 90 tanks (plus 17 twinsets) in the course of the dive. His ascent took so long to allow for his enormous decompression time.

Dahab is a small town on the Sinai peninsular, saturated with dive centres. Dahab means “Gold”, and it was named by the Bedouin for its golden sands. The sea here quickly drops off to great depths. Gabr made the world record dive in waters that are around 600 m deep.

During training the support team grew to 20 people to enable the logistical success of the deep dives: tec divers, dive instructors, IT experts, commercial divers, free-divers, photographers, drivers and carriers.

In the dive itself the deepest support diver was at 120 m. Any deeper and you would need another support team for the support diver. At 30 m there was a decompression ladder—especially made for the divers to hold onto. 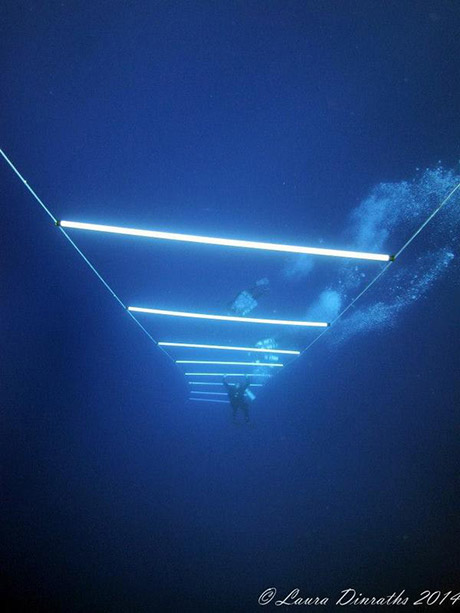 The deco ladder is 3 metres wide and has pipes at 3 metre intervals from 3 to 30 metres. It was tied to the actual dive line. Once Gabr got to this stage of the decompression, it allowed two divers to hang with him on the ladder to easily monitor his condition.

Dive computers weren’t guaranteed to work at the deepest depths, so for the dive itself Gabr used three dive computers and collected tags placed at points from 320 m down.

Ahmed Gabr was an officer with the Egyptian Military, having graduated from the Military Academy in 1994. He continued his career by joining the Special Forces, the Egyptian Rangers, and eventually earned a scholarship to the United States Army Combat Diver Course.