Ocean Fronts are where drastic changes occur within the properties of waters, such as areas where warm masses of water meet cold currents. To investigate ocean fronts, a team from the Schmidt Ocean Institute have deployed a fleet of aerial, surface, and underwater robots.

The robots are finding, tracking and sampling various physical, chemical and biological features of the ocean.

The resulting distributed robotic system and intelligent sensor network helped the research team to track a complex oceanic front dynamically, in an easier, faster and more cost effective way than that possible with traditional means such as only relying on ships.

For the first time ever, a section of a major open-ocean front was mapped with high resolution using a controlled fleet of dozens of autonomous robots. 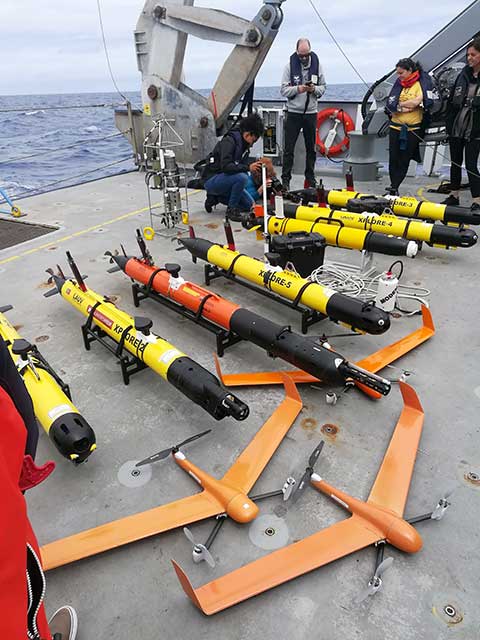 In less than three weeks, the underwater robots travelled over 1000 nautical miles for approximately 500 hours, while the autonomous surface vehicles operated continuously and the unmanned aerial vehicles performed over 25 flights totalling 10 hours.

The researchers expect that the technologies demonstrated in this expedition will help us to understand and monitor how key issues such as climate change, ocean acidification, unsustainable fishing, pollution, waste, loss of habitats and biodiversity, shipping, security and mining are affecting global ocean sustainability and stewardship.