Lucy Hughes from the University of Sussex has won the James Dyson Award for designing MarinaTex – a bioplastic made of organic fish waste ordinarily destined for landfill or incineration, and locally sourced red algae. Unlike many other bioplastics it will degrade harmlessly in a garden compost bin after just four to six weeks.

Twenty-three year old Hughes set out to solve two problems – that of single-use plastics and inefficient waste streams. Her MarinaTex bioplastic is a translucent and flexible sheet material, making it ideal for applications in single-use packaging. While it may look and feel like plastic, its similarities end there. In fact, it is stronger, safer and much more sustainable than its oil-based counterpart. Using a unique formula of red algae to bind the proteins extracted from fish waste, MarinaTex has strong overlapping bonds giving it strength and flexibility. The material requires little energy and temperatures under 100 degrees to produce. 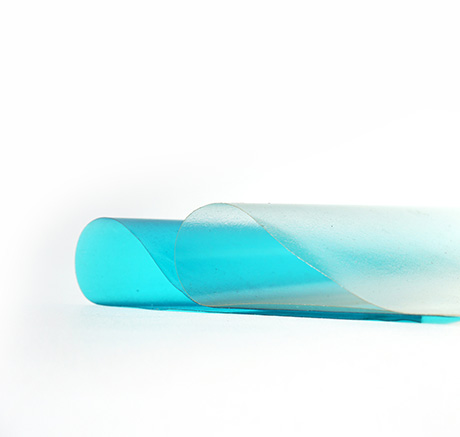 As MarinaTex uses byproducts from the fishing industry, this helps to close the loop of an existing waste stream for a more circular product lifespan.

“After hearing statistics such as ‘by 2050 there will be more plastic in the ocean than fish by weight,’ solving this problem became a priority. In particular, badly used plastic and single-use plastic applications” said Lucy of her inspiration “Plastic is an amazing material, however we have become too plastic happy and design only for the use of the product, which can sometimes be a fraction of the products overall lifespan. However, my journey did not start with the plastic problem. It began by looking into the fishing industry. 50 million tonnes of waste is produced annually by the global industry. I believed that there is value in waste and resources can be renewable.”

Unwanted offcuts from the fish processing industry is a huge waste stream in the UK and elsewhere in the world. They comprise offal, blood, crustacean and shellfish exoskeletons, fish skins and scales – the bits that end up in landfill rather than on our plates. Through extensive research, Lucy found that the fish skins and scales were the most promising sources, due to their flexibility and strength enabling proteins.

In order to give these proteins something to attach to and create a brand new material, Lucy set about finding an organic binder. Keen to keep the solution local in order to reduce transportation, she looked to the Sussex coastline on her doorstep, experimenting with different organic marine binders but finally settling on agar. It took over 100 different experiments to refine the material and process, most of which she did on the kitchen stove of her student accommodation. She finally created a consistent and plastic-like material that was both biodegradable and translucent: MarinaTex.

As national winner of the James Dyson Award, Lucy will receive £2,000 as well as moving on to the international round of the competition, for a chance to win £30,000. Lucy aims to commercialise her invention sustainably, using her award money for further research into how MarinaTex can become a global answer to the abundance of plastic waste while still harnessing local solutions.

Currently, one of the most commonly used bioplastic is PLA, a polymer made from, for example, plant starch. The definition of a bioplastic is a plastic that that will degrade through the action of naturally occurring microorganisms, such as bacteria, fungi etc. over a period of time. Note that there is no requirement for leaving “no toxic residue“, as well as no requirement for the time it needs to take to biodegrade. In an industrial composting facility, the complete composting process for PLA takes about 1 to 6 months, depending on (relatively high) temperature conditions and material type. It generally won’t degrade fully in home composting.

Although PLA can be recycled, it can’t be alongside PET plastics and so shouldn’t be put in the normal plastic recycling bin.

To breakdown PLA needs oxygen – landfill has anaerobic conditions so the PLA won’t break down here.

Anything good about it? The carbon footprint to produce PLA is smaller than petroleum-based plastics. Unfortunately though, at the moment, the industrial composting and recycling facilities for PLA are not yet available in many places.

Scientists reveal new method to study microplastics in the ocean