Over the last 30 years, half of the world’s coral reefs have suffered significant damage due to climate change and acidification. The last three years have been the worst. Major coral bleaching events, which happen when water temperatures are too high, have occurred in the Pacific Ocean, the Caribbean and in some parts of the Red Sea.

Coral reefs in the north Red Sea and Gulf of Aqaba though, are resilient to climate change and acidification.

While this is encouraging, there is growing concern that local disturbances, such as excess nutrients from sewage, fish farms, and flash floods may pose a threat to the coral refuge in the Gulf of Aqaba, a narrow body of water with a relatively dense human population around it.

Scientists from the Institute of Marine Science in Israel, the Mote Marine Laboratory in Florida and the University of Mississippi investigated how excess nutrients might negatively affect the coral reefs and reduce their resilience to climate change and acidification. Their results have just been published in Marine Pollution Bulletin.

When the corals were exposed to climate change and ocean acidification, like in previous research, the researchers saw that they remained extraordinarily resilient. However, when nitrate and phosphate were added, the coral was compromised while algal growth benefited from excess CO2 and nutrients. Algal dominance over corals in the reef means losing all of the beauty and biodiversity of the coral reefs.

“It is crucial to remove these local disturbances, which also include oil pollution, sewage, coastal development, and other pollutants in order to secure the coral refuge,” said researcher Prof. Maoz Fine. “Given the fact that Israel and her neighbouring countries – Jordan, Egypt and Saudi Arabia – plan to further develop the Gulf and Red Sea coastlines, these activities must be coordinated even though we are in a geopolitical situation that makes it difficult to do so. Coral reefs also contribute greatly to the world economy, so it’s important that the cities of Eilat and Aqaba, Jordan – which rely heavily on the tourism, biomedical, and diving industries – coordinate and act to preserve them.” 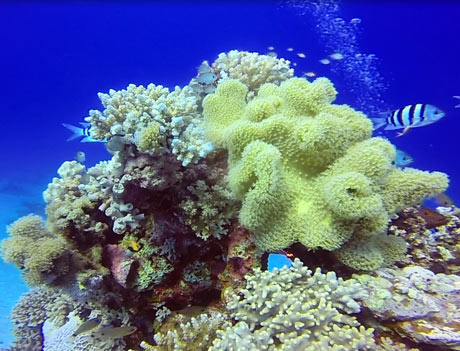 Jordan has rejected fish farms in the Gulf of Aqaba, due to the negative impact on marine life. According to Haaretz news, Israel is now thinking of building inland fish farms, fed with seawater. Fine deplores the idea on the grounds that the “used” seawater would be returned to the sea, which is just asking for trouble.

Fine is currently conducting additional studies to examine what affect other local disturbances, such as heavy metals, oil pollution, and other pollutants in the Gulf, are having on the coral refuge. “As a small country there is little that Israel can do to reduce global carbon emissions that damage corals, but we can make a real impact by removing local disturbances. If current predictions about climate change continue, we need immediate protection,” said Fine.

‘100 Years’ until Bleaching a Problem for Corals in Northern Red Sea, SCUBA News

Best Places to Dive in January