Wreck diving isn’t just for experienced divers and there are plenty of shallower wrecks, and well-known wrecks with shallow sections, that are suitable for less experienced divers. Here are our top 7 shallow wrecks to begin your journey into the fascinating world of wreck diving.

Australia has one of the top wreck dives, sitting in the centre of the Great Barrier Reef. The SS Yongala sank in 1911 and is in excellent condition, protected by the Historic Shipwrecks Act that has prevented wreck penetration and left the interior in great condition. The wreck is 109 meters long and is filled with marine life. Divers may get to see bull rays, bull sharks and groupers at the Yongala.

The SS Thistlegorm is Egypt’s most famous wreck and sank in 1941. It is over 121 meters long and has plenty of exterior and interior areas to explore. Divers can see motorbikes, guns, trucks and cargo, plus an abundance of marine life. This popular wreck is suitable for a variety of diver experience levels. The SS Thistlegorm is best visited during Egypt liveaboard diving safaris to get in the water early and avoid day boat crowds. There are plenty of liveaboards that visit the SS Thistlegorm and the Freedom VIII liveaboard is a good budget-friendly option.

Abu Nuhas, the ‘ships graveyard’ of Egypt, is a submerged reef well-known for five wrecks; the Giannis D, Chrisoula K, Kimon M, Rosalie Moller and the 1869 Carnatic. The Chrisoula K, also known as ‘Tile Wreck’ sank in 1981 and was a Greek freighter carrying Italian tiles to Jeddah. She sits in an almost upright position on an open sandy area and is very accessible, with her shallowest parts at just 3 meters depth. This wreck is encrusted in hard corals and is home to lionfish, triggerfish, clown sand wrasse and other marine life. The SimSim liveaboard offers dive safaris to Abu Nuhas and requires a minimum of 20 dives to join their safaris.

Grand Cayman hosts one of the best-known wrecks, the USS Kittiwake. This US Navy submarine rescue vessel was purposefully sunk off Seven Mile Beach in 2011. The area around the wreck is known for having exceptional water visibility, making it a perfect place for new wreck divers. This 77-meter-long wreck has 5 decks, 2 bridges, a navigation room and a huge interior to explore. Divers can expect to see large schools of jacks, stingrays and a variety of other fish species. Turtles and Caribbean reef sharks are also seen there.

The Keith Tibbetts wreck is another wreck to dive when visiting the Caymans and sits at 20 to 30 meters depth. The top of this wreck is even accessible to snorkelers. 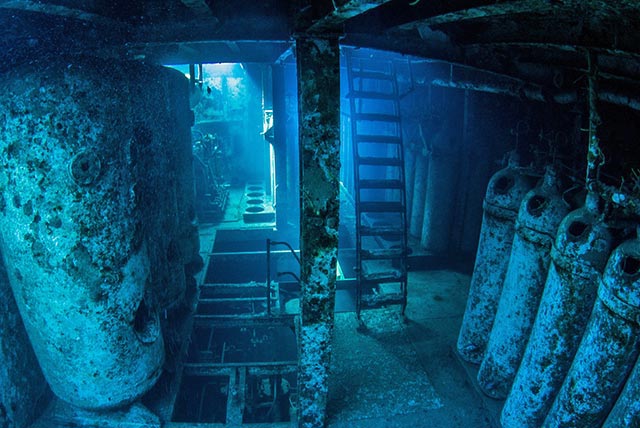 Nassau is a mecca for wreck diving and has two wrecks that have been used in James Bond films; now aptly named the James Bond wrecks. Both wrecks lie around 13 meters depth and can be visited together during the same dive. The wrecks feature extensive coral coverage, sea fans and barrel sponges. There are plenty of schools of fish and macro life to discover. Large stingrays and turtles are commonly seen at these wrecks and the surrounding reefs. It is an ideal scuba location for all diver experience levels.

Coron island made history during World War II as the site of a battle between Japanese warships and American aeroplanes. This battle resulted in numerous wrecks being created in the shallow waters around Coron and this area is now a popular wreck diving destination.

The Olympia Maru wreck is a 130-meter-long former supply ship and lies upright at around 30 meters depth. The main deck is at 18 meters depth, making it easily accessible to less experienced divers. There is plenty of marine life at this wreck, including batfish, lionfish and scorpionfish. There is also good coral coverage on the wreck itself.

The Nanshin Maru is another shallow wreck at Coron, with plenty of marine life, and is great for new wreck divers.

This article was written by divers and writers at LiveAboard

Your ultimate guide to scuba diving in France