One of the extraordinary things about bull sharks is that they are as happy in freshwater as they are in the sea. They have even been seen far inland up the Mississippi river. Many spend time in the freshwater Lake Nicaragua – jumping up the river like salmon to get there. 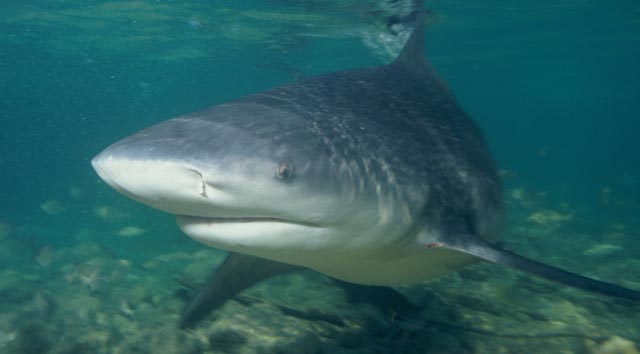 Bull sharks – latin name Carcharhinus leucas – are medium-sized sharks with thick-set bodies. They are requiem sharks, related to tiger sharks and oceanic whitetips. Like these they are aggressive hunters. They eat all sorts of animals, including turtles, birds, dolphins, terrestrial mammals, crustaceans, fishes and other sharks.

The young bull sharks live in inshore estuaries whereas adults are highly dependent on coral reef communities for their food. 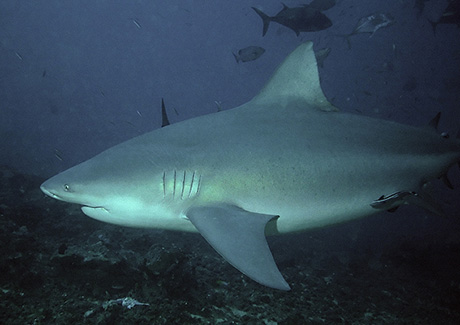 Bull shark by Pterantula CC BY 2.5

Bull sharks cruise the seas alone until it’s time to mate. The mothers are viviparous – they give birth to living babies rather than to eggs. Their litters contain between one and fourteen pups. A single litter of pups can come from two fathers. Scientists think that the female sharks mate several times with different males to increase either the number, or the quality, of their babies.

The IUCN assess the bulls shark as “near threatened”. This means likely to become endangered in the near future if trends continue. The location of nursery areas in estuarine and freshwater systems makes the species vulnerable to pollution and habitat modification. Other threats include recreational fishing and by-catch in commercial fisheries.