Pinna nobilis, the giant bivalve, is endangered. Although in some places it has historically been abundant, there has been a lack of up-to-date information about its exact distribution. SCUBA divers therefore went looking for the giant mussel in the Ionian Sea, Italy. 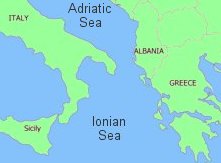 The results of the study indicate a tentative of recovery of P. nobilis population there, in spite of all the difficulties of a degraded and heavily polluted environment and the damages of illegal fishing methods.

The divers found the pinnids at depths from 3 to 16 m. Their numbers ranged from one individual in 10 hectares, to one every 1.4 hectares. (A hectare is around 2.5 acres or 0.01 square km.)

The survey method employed in this study was non-destructive and relatively simple to perform.

Pinna nobilis lives only in the Mediterranean Sea (which encompasses the Ionian Sea). It likes seagrass meadows and grows up to 120 cm. It sticks up out of the sea bed so is easily seen by divers, once you know what to look for. Although in the Ionian Sea the mussels were found between 3 and 16 m, in other areas of the Med, such as the Adriatic Sea, they live down to 30 m.

In another study, published last month in the Marine Biology journal, Stelios Katsanevakis of the University of Athens investigated the growth and mortality rates of Pinna nobilis in Greece. He found 160 of the mussels and monitored them for 17 months. He discovered that growth rates had a seasonal pattern. The mussels grew slowly during the cold months, and also during August when water temperatures exceeded 29 oC. They grew quickest during late spring and early summer, probably due to an optimum combination of temperature and food availability. Younger individuals grew faster than older ones.

P. nobilis is a protected species in the EU and its fishing is strictly prohibited. However, in the Greek study many deaths were caused by fishing. The mussels were poached exclusively by free-diving and fishing mortality was practically zero at depths below 9 m. Because of this large individuals were restricted to deeper areas.

What do you think of this news item? Start a discussion.
Bookmark with: del.icio.us | Digg | Newsvine | NowPublic | Reddit

State of Europe’s seas getting worse

Posidonia in Peril: Save the Seagrass Meadows