Tomorrow is the SCUBA Challenge, where disabled and able-bodied divers will complete 64 lengths in the pool – fully kitted up – and 2 open water dives to raise money for Disability Day.

Organised by Dave Thompson, who sustained a spinal cord injury whilst playing American Football and has since been a full time wheelchair user with limited use in his left arm and none in his right arm or legs. As well as able-bodied divers, Dave is joined in this year’s challenge by three other disabled divers: two have spinal cord injuries and one has had a quadruple heart bypass. Proving the scuba diving is a fully inclusive hobby.

They are raising money to support the world’s largest ‘not for profit’ voluntary-led disability exhibition. If you would like to join Dave and the team, please email Dave on dave.thompson@5bp.nhs.uk. Alternatively you can donate at https://www.justgiving.com/scubachallenge2014/.

One of the divers is 22 year old ex-serviceman Tom Coleridge, a full time wheelchair user since being shot in Afghanistan in 2010. Tom’s injury left him paralysed from the waist.

The SCUBA Challenge day will start with an 18 m morning dive at Capenwray Quarry in Lancashire, followed by an afternoon 18 m dive at Eccleston Delph and finally late afternoon 64 lengths of the swimming pool at Woolston Leisure Centre, Warrington (UK).

Dave told us how he felt on a previous year’s challenge (and that one didn’t include an open water dives).

“For me it was a slow, slow and even slower pace. After ten lengths I felt a deep pain in my one good shoulder which was probably due to the weeks of training. I managed to stop a few time (under water) whilst John my dive buddy for the day adjusted my weights. But once into a rhythm the next thirty lengths flew by, and at forty five lengths John signalled that I should change my tank as I was low on air, I must admit that I was so knackered, I hadn’t noticed. As I surfaced briefly, my wife Pam handed me a drink, but just reaching for the bottle was excruciatingly painful. The stretching hadn’t done me much good; in fact my single arm long stroke was now reduced to a very small flicker type movement, but it kept me going between several rests lying on the bottom. At one stage I just wanted to close my eyes and go to sleep, thinking that I might wake up and it would be over.

But eventually John counted down the last few lengths from ten, and then somehow I saw one finger. This was it just one to go. One final push to the finish and as I surfaced everyone was standing around the pool cheering and clapping. As I hung onto the edge of the pool I remember seeing Simon’s face with a huge smile, and then Graham grabbed hold of my tank just as I was sliding back into the water. I remember looking around and feeling a huge sense of physical achievement, a sense that I hadn’t felt for twenty two years. One of the highlights of the day was swimming the last length with my son Gavin who was attempting a try dive. Ironically I finished at the opposite end to the pool hoist and had to swim back to get out. But on the way back John handed me a stud earring that had glistened at me each time I swam past it. It’s strange how something so small became a focus even though I was totally exhausted. My spirits were lifted as one by one everyone came forward as I handed out their certificates.” 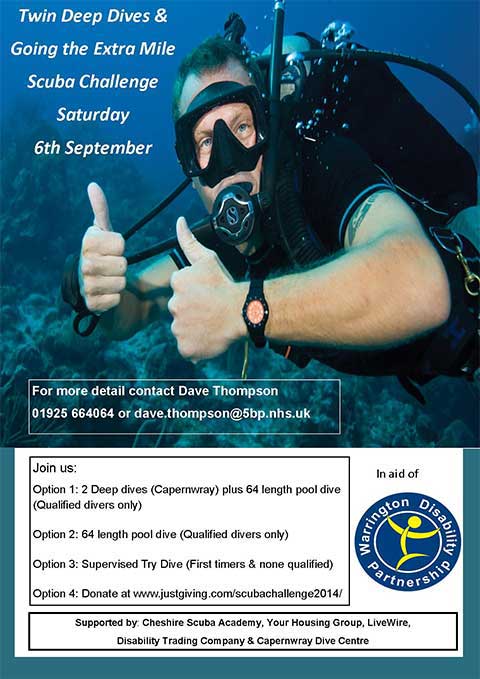 To donate, join in or find out more go to https://www.justgiving.com/scubachallenge2014/ or contact Dave on dave.thompson@5bp.nhs.uk

Researchers need info from disabled divers and their instructors

Scuba Challenge on This Weekend