Over $80,000 of prizes has been awarded to 64 underwater photographers, in the annual Ocean Art competition. Organised by the Underwater Photography Guide, judges included the renowned Tony Wu, Martin Edge, Marty Snyderman and Todd Winner.

The best of show was a stunning wide-angle photo shot under the ice by Victor Lyagushkin in Russia. 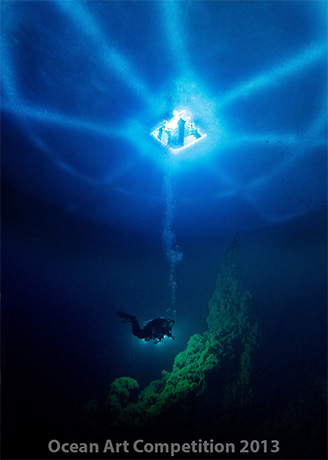 This winning photograph was taken near Ekaterinburg, Russia. Lazurny is an old neglected quarry, totally filled with ground waters. Pine trees and bushes on its bottom remain green for many years. In winter the quarry is covered with thick ice and snow. The circles and rays on ice “sky” are man-made. According to Russian ice diving standards the snow should be removed from the ice in such a manner as to let divers orientate themselves beneath the ice and easily find their way back

The outstanding image in the wide-angle category was of a freediver swimming into a massive bait ball in Tenerife, by Francis Perez. 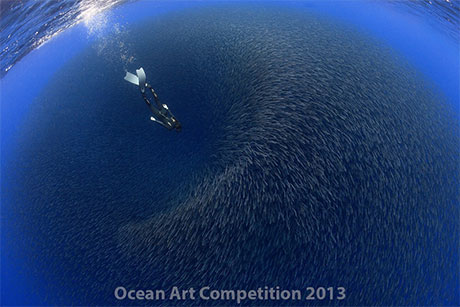 Dolphins, shearwaters and seagulls were all attacking this enormous shoal of fish, making it change shape.

Another winner from Tenerife – Montse Grillo’s portrait of a turtle. 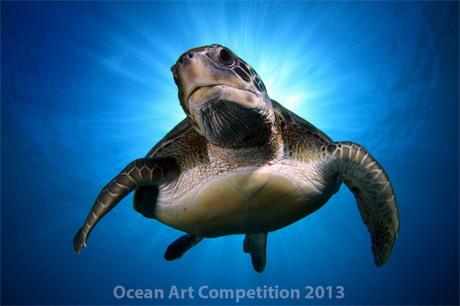 The green turtle was coming fron the surface with the sun behind it. 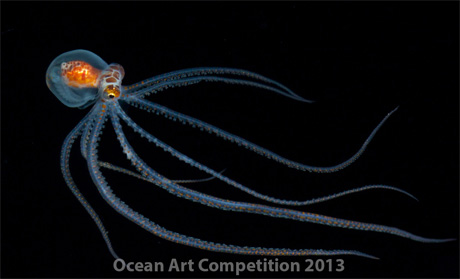 This was taken at night, five miles off the coast of the Big Island of Hawaii. The photographer says “The tiny octopus stopped in my lights, intently studying me as I studied it, and then began to expressively posture and react to my every move. The cephalopod would move into position then freeze for a few seconds before adjusting its exaggeratedly long arms again. It went through probably a dozen different poses before moving on and into far deeper water than my comparably feeble physiology would allow.”

The contest was open to novices and professionals alike. This jellyfish photo won the novice DSLR category. 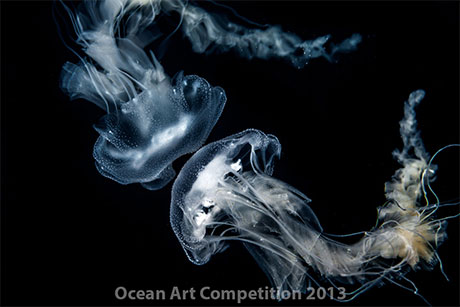 Jellyfish with its reflection on the surface. Shot on the Luduiq wreck in the Arabian gulf (Abu Dhabi).

Thousands of entries were viewed by the judges before the final set of amazing images were selected and deemed some of the best underwater photos in the world. 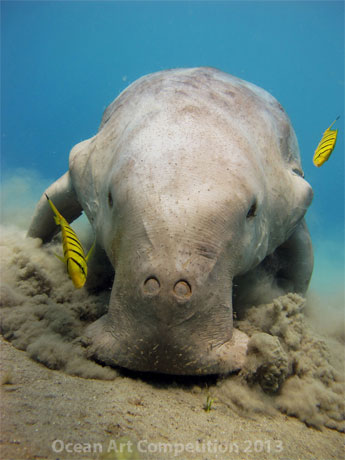 Judging was very difficult due to the high quality of so many images. Contest judge Tony Wu said, “Judging the competition this year was extremely challenging. We saw high-calibre images from many talented photographers and the judging team spent a lot of time selecting the final images. Congratulations to all the winners.”

You can see all the winning photos on the Underwater Photography Guide site at http://www.uwphotographyguide.com/2013-ocean-art-contest-winners.